Soy tu duena “Am your Mistress”

Soy tu duena “Am your Mistress”, sometimes called “Am your Owner” is currently showing on Citizen TV on weekdays from 8-9pm. And I find it quite interesting to watch though not so regularly.
It mainly about a young woman ‘Valentina’ that was hurt by her fiancé, and she is convinced that all men as as bad as her ex. And she kind of takes her anger on everyone around her.
But as most soaps be, another guy (Jose Miguel) shows up in her life and the question is, “will she fall in love again or she will be over whelmed by anger?”
I should not forget to tell you about ‘Ivana’, the woman hated by most women yet loved by most men.

After a long wait, Akoola has finally launched a website that bring you all the articles at the palm of your hands… well at the face of yo screen. 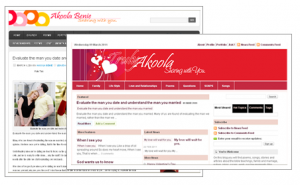 Have a great time,

Maya(Left) in forbidden love, she is said to be 'the unlucky' in love

A Love Story (Caminho das Índias), is a soap that brings Brazil and Indian examining the beliefs and values that the cultures.

It focuses on a forbidden love between two Indians of very different origins, Maya and Bahuan.
We look forward to the power of love challenging the forces of tradition, traditional dances and songs and of course Indian art.

Maya Meetha is a joyful, intelligent, young woman working in a telemarketing centre in Rajastan and belongs to a traditional family from the merchant class.

Bahuan is graduating in the US, works in an American firm, but never forgot the humiliations he suffered as a child because of being an Untouchable. And he is so scared that his tradition will drive him away from the woman of his life.

Anyhow the soap has just begun, all we need is to stay close to our TV and watch every little bit of it. Showing on UBC (in Uganda), 8-9pm Weekdays.

So lets to it.
Thanks,
Benie.

We started from 0 together and now we have hit 7000+
Am really humbled.

All i can say is, thank you.
Thank you….
And may God bless You.

After the two sides od Ana,
The next soap on my list is shades of sin.

I don’t likes soaps that are sad,but of late i find my self glued to them.

I must say i like it’s graphics, and the actors are so mean… and they look so stupid to believe every thing they hear….
Well those are soaps.

I did not start it from the start … and i keep on wondering, “Where does it get it’s title?”
I have a problem with it.

Overview of Shades of Sin

Twin brothers are separated in childhood and they grow up without knowing about each other. As adults, they suffer an accident in the same place, at the same time. One disappears in the ocean and the other decides to assume his identity. Years later, as he finds out he has a son and that the woman he loves did not cheat on him, he decides to reclaim his true identity.

I thank my brother Kiiza, aka. kabonde who introduced to wordpress.com …
by then i was thinking of joining blog spot.

I loved the templates of wordpress,
the colors, the format, the layout.

I can say, it’s cool enough for me.

Mostly,
i thank God for the words he has put at in my mind,
and the desire to share my thoughts,
and imaginations.

Other wise,
i would not have said anything.
Lets keep it on,

Yesterday I watched Ignacio, attempt to kill his ‘father’ before he finds out that his 1st son is a bustard.
And I was like… did you have to do that?

Actually when he asked the nurse about the medication she was giving the dad I was like…
don’t be stupid man! But as usual he did not listen.

He acts as though he is just inquisitive, and then he pulls a wrong move,
that was the same trick he pulled on Ana and they were locked in the lift.

People in commas normally listen what is going on around them and am sure the dad heard every thing,
but he was helpless to fight back.

I have a feeling the fall of Ignacio the great is just about to happen!
Though he thinks that he can now make savings to take him thru the bad times when the truth is known to every one.

I cane to learn that at times we may be given opportunities but we don’t even notice how lucky we are…
because we spend a 1000times bragging on what we have, rather than putting to use.

What if Ignacio was not that arrogant, stupid, and drug addict…
may be even after realizing that he was not a Bustamante he would have gotten some courage to face life on his own.
But No, to him the only asset / talent he had was his father’s name.

I wonder what waits for him.
But lets watch on/